The growth of Travis CI has been tremendous over the last year. We’ve seen lots of projects adopt it as their continuous integration platform, and we couldn’t be more thrilled about that.

Along the way, we discovered pain points in the Travis architecture and in the way the platform handles fairness in builds. Big projects with big build matrices tend to cause our queues to clog up and make other projects wait until they’re fully done.

We’ve been pondering for quite a while how we could solve this problem and introduce more fairness into the system, allowing smaller projects to build quickly and giving all projects a fair share of build resources on Travis CI.

We’re introducing a limit on the number of concurrent builds that every project can run on Travis CI. So far, we’ve immediately queued a project’s entire build matrix onto our queue, ready to be picked up by a worker. That’s one of the basic reasons why big projects with big matrices tend to make smaller projects wait. It’s a first-in-first-out queue, so they’ll patiently wait until all of the builds are done and it’s their turn.

With the new logic in place, one project can run five concurrent builds. As soon as one is done we’ll automatically push the next. If we have capacity and a project still has five builds running we’ll push another project on the worker queue. That way, we ensure that a certain level of fairness allows all projects to build as quickly as possible while making sure that a small number of projects can’t fill up the queues for everyone.

We’re aware that this might cause builds for projects with bigger build matrices to take a bit longer, but we think the overall fairness introduced by this change makes Travis a place that’s evenly shared by the community.

We’ll be watching how that change works out in production, and fine tune the number of concurrent builds if necessary. The number five is something we chose based on the overall fairness and the build capacity we have available but it’s not written in stone. We’ve also been thinking about taking into account the general runtime of builds for a particular project and be smarter about scheduling by giving projects with faster test ways a head start. But that’s just off the top of our heads for now, we’ll keep an eye on how things are going with the current change in place.

So far, we’ve pushed builds immediately onto our RabbitMQ queue as they come in. This had the advantage that they’d be popped off in the order they arrived in Travis, and we wouldn’t have to worry about scheduling.

But it also meant that our queues would have to be kept in sync with the database. Should we lose the jobs queued in RabbitMQ for some reason, we had to manually queue them. With the new logic, the database is the single source of truth and jobs are only queued if there’s capacity available to build them.

Instead of pushing a job immediately on the queue, it’s now only stored in the database. A job is now scheduled based on the heartbeats we receive from a worker. If a worker signals that he has build capacity, and we find a build that’s ready for the worker’s language queue, it gets pushed and built. Within that logic we embedded the limit on concurrent builds along the way. If a project has reached its limit, another one that’s available gets pushed instead.

All this has the benefit that we’re starting to move into a direction where Travis is agnostic to the message transport used between the system’s components. We could use ZeroMQ or simple HTTP instead, because we’re doing simple inter-process communication instead of relying on the ordered nature of AMQP, because exact order is not important anymore.

Another upshot of this is that we don’t need to do manual requeing anymore, the new logic will automatically pick up any build that’s ready to be built.

We have several areas in Travis where order is still important currently, but we already have ideas on how to tackle them. We’ll keep you posted on the technical details!

On a fun side note, the changes described here were deployed earlier today. Here’s a graph of the average run time of handling worker updates went through the roof, middle finger style, until we added a database index: 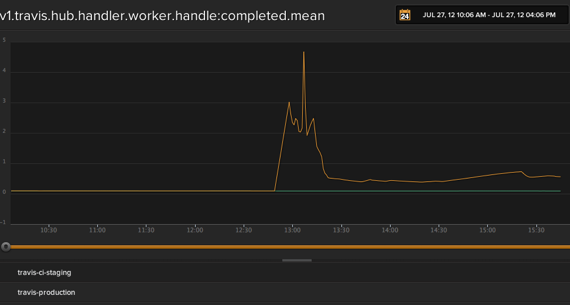 Introducing a quality of service level to Travis CI doesn’t only introduce a predictable level of fairness into the community platform. It’s also the groundwork for Travis Pro, where we put a limit on and will charge based on the number of concurrent builds for an organization.