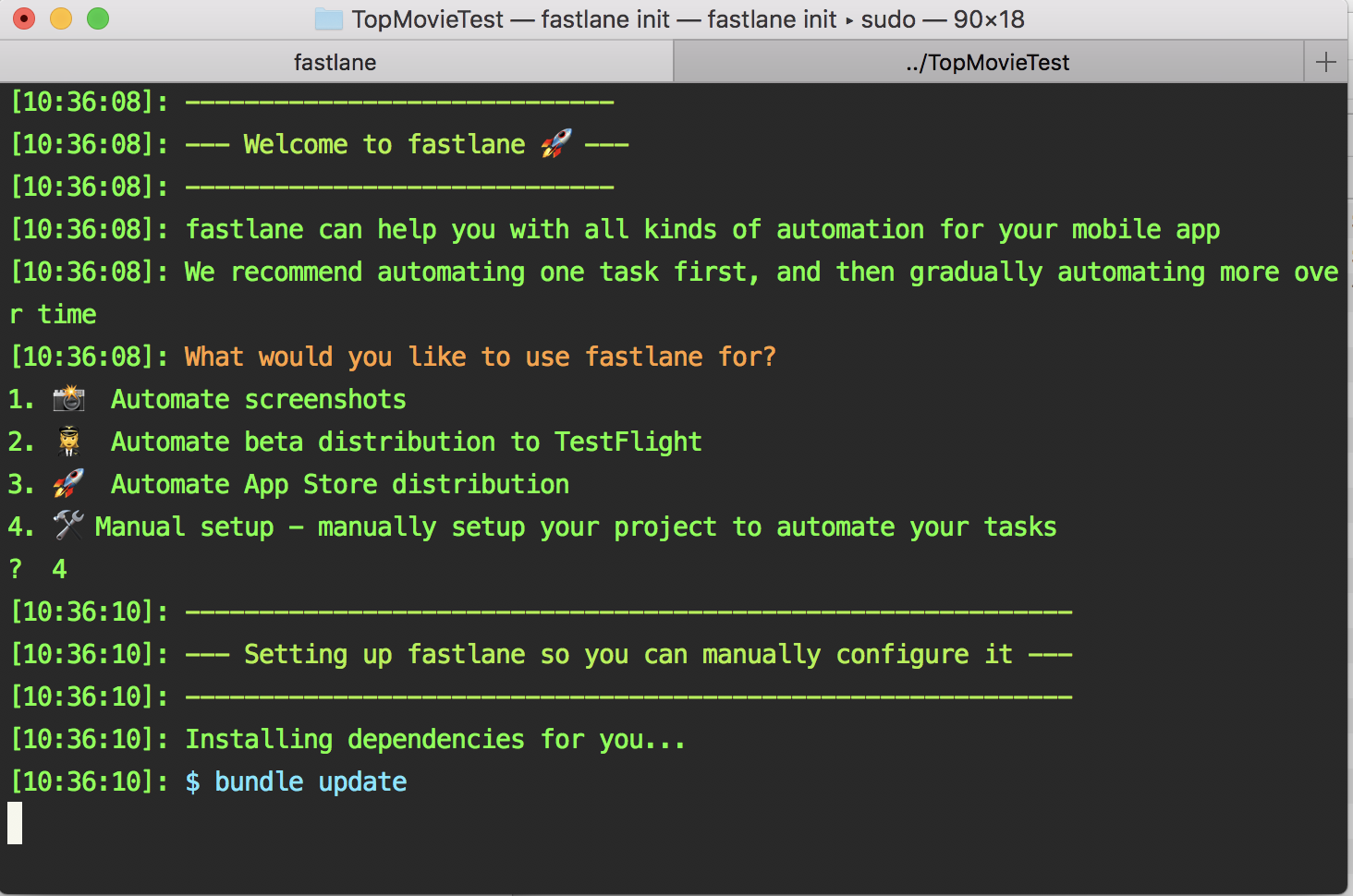 Fastlane is one of those iOS development gems, that sometimes not everyone talks about because it’s so helpful. Luckily I’ll tell you all about it with a lengthy demo, code samples, and my GitHub repository with a working Fastlane/Travis CI project.

Fastlane is a Google project that I’ve always found really useful. After doing a whole day’s research, I was able to successfully use Fastlane. This tool is still very useful in my opinion when it comes to actually splitting tests. Some things I saw people forget, is the simple start. So in that case let’s press continue, and get started!

If you want to checkout my repo before you start, feel free! https://github.com/Montana/travis-fastlane

When using Fastlanes you should really remember if you’re going to pass parameters from the command line to your lane, use the following syntax:

In theory, you can have as many lanes as you want, so you can invoke variant lanes. Example being:

Now within lanes, you can INVOKE other lanes for various other reasons, in other words, each lane can have different functions essentially:

If you’ve used Fastlane at length, you’ll know switching lanes is usually called lane hopping. You can lane hop feasibly, without using too much CPU:

Just like anything you query, you can retrieve the return value in this case it’s through a lane callback. In Ruby, the last line of the lane definition is the return value. Here is an example:

You in theory never want to reach the end of a lane, and if you do - you’re not going to be executing much longer:

So while executing lanes - there are conditionals you can use, such as next is used during a lane and switch, control returns to the previous lane that was executing, so lanes in theory can revert back and forth.

When you stop executing a lane early with next (lane switching), any after_each and after_all blocks you have will still trigger as usual :+1:. This would include being called (via a lane callback) before each lane you’ve switched to.

So this is a good reminder from myself, that when doing after_each blocks are called (again, by the lane callback) after any lane is called. This would include being called after each lane you’ve switched to. Just like after_all, after_each is not called if an error occurs. The error block should be used in this case.

With all these scenarios, before_each and after_each would be called 4 times, by the lane callback. Remember before the deploy lane, before the switch to archive, sign, and upload, and after each of these lanes as well, a lot of users forget.

Now Fastlane has different actions that can communicate with each other using a shared hash, in other words, communicating with other lanes. You can access this in your (lanes, actions, plugins etc.):

To feasibly get information about available lane variables, available lanes to switch on, run fastlane action [action_name] or look at the generated table in the action documentation.

It can be useful to dynamically access some properties of the current lane. These are available in the lane_context as well:

They are also available as environment variables:

Sometimes you might have a lane that is used from different lanes, or a lane from a hopped lane:

This will hide the lane from:

Control configuration by lane and by platform

In general, configuration files take only the first value given for a particular configuration item. That means that for an Appfile like the following:

So, the app_identfier will be “com.used.id” and the second value will be ignored. The for_lane and for_platform configuration blocks provide a limited exception to this rule.

So for_lane blocks will be called when the name of lane invoked on the command line matches the one specified by the block. So, given a Screengrabfile like:

Then, for_platform gives you similar control based on the platform for which you have invoked fastlane. So, for an Appfile configured like:

So now you can expect the app_identifier to equal “com.forplatform.mac.forlane.release” when invoking Fastlane mac release.

Is it plausible to change the fastlane execution folder while inside a lane?

Yes, you can do this. The way I’ve classically done this is make two fastlane lanes, one for the old location, one for the new, so then your new script looks somethng like this:

Setting fastlane up in iOS for different export methods and provision profiles?

So my guess is that anyway your project is scoped you have more than 1 bundle identifier to the different apps in question.

Remember with Fastlane you can setup a new target and just create the same lane with a different scheme for that target (or build a function and send the correct scheme as a parameter). You will also have to create a different bundle id.

If you don’t wish to create a different target and you are you using Automatic signing on your project, (some SSO), you will have to change it to manual and specify the provisioning profile there.

Please make sure there’s nothing that could conflict with Travis or Fastlane, so it should look like something like this:

Can fastlane skip before_all or after_all in certain lanes in Travis?

You certainly can with Travis and Fastlane. One way to accomplish this with certain lanes would be the following:

Happy building! Any other questions please feel free to contact montana@travis-ci.com, and I’ll be as quick as I can in the Fastlane to answer your question.